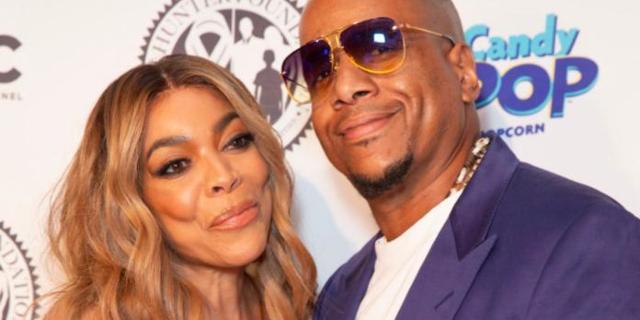 Amid reports that Wendy Williams' estranged husband Kevin Hunter is "panicking" over finances in their reported $60 million divorce proceedings, he was recently spotted attempting to pawn jewelry. According to Radar Online, Hunter drove his Rolls-Royce SUV to a New York City pawn shop on June 24. There, he was seen walking into the store with a small bag.

"He didn't seem to have a care in the world," an eyewitness stated to Radar. "He left his car in the bus lane and went inside the pawn shop for 15 minutes."

Eventually, the 47-year-old emerged from the shop with the same bag, with a source saying that he was "very animated showing off the jewelry to the expert in the store."

InTouch reports that Hunter had "free access to Wendy's money" during their 21-year marriage, but that is "not the case anymore."

“She’s cut him off, and that means that Kevin is finally hurting for money," the insider added. "He’s terrified he’s going to end up with nothing.”

Williams filed for divorce in April amid rumors that his alleged mistress had given birth to a child after Williams admitted she was living in a sober house amid a battle for her sobriety. "Wendy's not looking back," a source told Us Weekly. "Her friends and family thing the sky's the limit now that Kevin's gone. She still has healing to do, but she's taken several major steps in the right direction. She's strong and resilient."

“This is a crazy situation, Wendy is in a halfway house fighting for her sobriety, while her husband is at the side of his mistress who is giving birth to a baby,” the source said. “Everyone who loves Wendy is heartbroken and furious. Her fans are furious that she lied to them about her health and about what she has been going through.”

Following the attempted pawning, Hunter and Williams both supported their son, Kevin Hunter Jr., at his court date regarding an altercation between the father and son in New Jersey. Hunter Jr. pleaded not guilty to charges of assault, with the prosecutor requesting more time to "review factors in the case."

As was previously reported, Hunter Jr. was involved in a physical altercation with his father in a New Jersey parking lot on Wednesday, May 22. The altercation reportedly stemmed from the family drama currently shrouding his parents following their divorce, and was prompted after Hunter Sr. told his son that Williams was “brainwashing” him.

The verbal fight escalated into a physical one, with Williams’ estranged husband reportedly putting Hunter Jr. in a headlock, resulting in the teenager punching his father in the nose to loosen the hold.

Although the 18-year-old was released from a West Orange Police Department precinct shortly after his arrest, charges against him were not immediately dropped, and criminal attorney Yelena Sharova claimed that he could be facing facing hefty fines or even jail time up to six months.